It’s up too high | Album 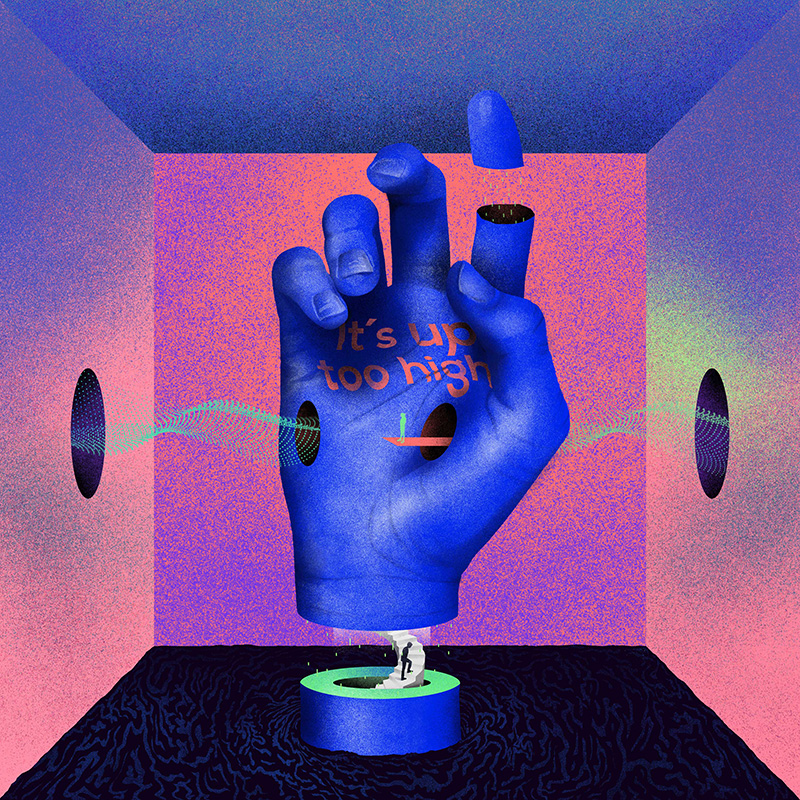 It’s up too high is their first big step towards achieving this dream. They have wrote and produced their debut album completely alone, nearly isolated. Just before the COVID pandemic hit the world, they decided to build their own studio in a Kreuzberg basement in Berlin. With the help of friends and (too) many YouTube tutorials they taught themselves how to record music and figured out what equipment they needed to do it. Over the next two years, they would spend thousands of hours in their self-build studio, using every free minute of days otherwise filled with work and studying.
The result is an album that encompasses everything that happened in those two years in their basement. There were creative outbursts, honest love, intense friendship, naked honesty and never ending hope, but also disruptive conflicts, ever-returning frustration, weariness and insecurity, and the at times overwhelming question, if it is all worth it.
It’s up too high is a journey deep into the soul of three people who were not only searching for the music they wanted to create, but also discovering who they were. 9 songs. Everyone unique, yet complimenting each other. Musical minimalism and eruptive ecstasy. Razor-thin fragility and steadfast confidence. While one song slowly lures you in, another jumps directly into your face.
Influenced by modern electronic sounds and the honest, direct funky flair of the 70s and 80s, TENGO KAWANA combines catchy pop melodies with experimental sound worlds. Next to pop and rock elements, you will find electronic (Everything you need), trap (Blue Noon), hip-hop (Who you are) and even reggae-ton (Aqua Clara) in It’s up too high.

Their first single Before ist about a brutal fantasy world, that Rubén has visited again and again in his dreams. It’s a song about self-confidence and the desire to understand yourself better. „It’s not about being accepted by everyone, but by the people that truly care about you.“
Seven tells the story of feeling like you’ve created a version of yourself that doesn’t feel right. Nadine sings about and frees herself from the self-imposed mechanism of mistrusting her own feelings and the belief that everything bad happening around herself is her fault.
Blue Noon is a dialogue. Two lovers pretending that everything is as it should be. A careful dance driven by the desire to free themselves from their painful past. „At the end of the day, we’re all imperfect people who simply need someone standing beside us.“

TENGO KAWANA loves and lives for being inspired. The magical realism of the works of author Haruki Murakami did not only give the band their name, but has also become maxim to their work. The conflict and blurring borders between magic and reality. Music as the link between spell and truth. The conflict of everyday life with the dreams that keep us alive.
This is only the beginning. 9 songs. 28.87 minutes. “It’s up too high? You never know if you don’t try.”